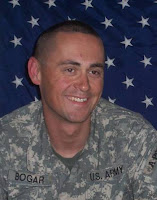 The other day, a very good friend asked me via email to honestly tell her 'how it was going.' She was referring to the recent death and loss of my son in Afghanistan. I asked her if she really wanted an honest reply - she said she did. I replied - she suggested that I post it. Here it is:

I just packed up the makeshift memorial that had formed at the bottom of the stairs for Jason. It was like his voice and some inner voice said it was time to stop walking by this altar - 'let it go dad,' it kept saying. It was hard to do, but was clearly right. I packed away letters, pictures, medals, articles of clothing, etc. and wept anew with each item and memory. Sometimes now it feels like I am sleepwalking through the aftermath of a disaster, a little numb, worn to near apathy with grief, unsure how to proceed, punctuated with moments of appreciation and clarity. Something inside feels worn thin, victimized, raped by God and left without a reason. This poem came the other morning:

I prayed, and nothing happened –
Jesus did not appear,
no ‘peace that passeth understanding,’
not even a numinous chill…

I watched a teacher on TV, from the East
telling me all the religions were the same,
that the truth would set me free,
and on and ona ndon ananda ndon and on
until his droll chant ceased -
- he wanted money for his book -
I felt no truth, no peace, and then
he faulted my consciousness.

My chest was a cavity
filled with a thousand swirling wraiths,
nondescript, terrifying in their discordant flurry,
not asking me to pray, but to enter…

I breached the mood, through my throat,
down a windpipe raw with grief –
into a claustrophobic corridor, met by
a monstrous yelping dog
nearly chasing me back to my prayers
and the chanting master. I moved past,
and there,

Across the dark cavern I saw the source,
a single shimmering wraith
held an urn aloft with a

There were no words,
but by his glance, the cavern, or my mind
lengthened, and a million fathers stood around me,
and a million mothers, wives, children and
others too…

And that brown-eyed specter nodded at the horde,
saying nothing, making it clear that my hollowness
was not from his absence,
but from the presence of the empty multitude
as lost, as sad, as confused as me.

I turned back to the wraith, a wry smile,
also very familiar, had replaced the dark eyes,
and then slowly faded from my sight,
I think I saw a last wave, or maybe a salute.

I returned
through the dim voiceless passageway.
I felt no sweet resolution, no truth,
none of the peace I had hoped for.

But there was a slight comfort,
a solace in the necessity of my ignorance,
the brilliance of hopelessness
in order that love
might crack the angry chrysalis,
giving birth to something…new.


I have been reading biographies the past weeks - just finished Lincoln's Melancholy which is a psycho-biography from a point of view that is very much in the Depth Psychological tradition (specifically Archetypal Psychology). This book views melancholy as it was seen before we adopted the medical creedo of 'mental health' - that is, before the statistical psychologists, labeling psychiatrists and light-obsessed self help experts got hold of it in the 1860s and into the modern era. People actually used to see the 'miracle of melancholia' as a necessary, albeit potentially destructive and fatal force of character, which fashioned one for his/her destiny. Remember, this is back when people routinely lost children, wives, husbands, etc from something as 'minor' as a toothache, influenza, child birth or a simple infected wound. This is when Keats died of TB.

Lincoln's story sent me to the Civil War hero Thomas 'Stonewall' Jackson's biography by Byron Farwell. I found this nugget last night from that story; after Jackson's first wife Ellie died in childbirth, losing the baby too, in a state of numb devastation he wrote in his journal,

"Objects to be effected by Ellie's death: to eradicate ambition, to eradicate resentment and to produce humility."

Wow, that really hit home. I have had the same thoughts and feelings. I was refreshed to see a godly man who saw the negative feelings which came from seemingly senseless and horrific tragedies as a means to shaping character. These forces are always chiseling away, often against my own thoughts, desires and will. Divine Violation is what it sometimes feels like...the unsolicited ransacking of a secure fortress by the Holy Spirit, my best defenses demolished and occupied by a foreign invader. I have surrendered for the most part...the fortress of my soul is being rebuilt with serious modifications. It reminds me of what Jesus said, "...the kingdom of heaven has been forcefully advancing, and forceful men lay hold of it." Matthew 11:12

I also just read about George Frideric Handel, the 18th century composer. He found himself a fallen man in his mid 50s. By 1741 he had suffered several failed operas as well as poor health. He was in a state of financial poverty, physical illness and what we would likely call today, 'clinical depression.' Living in a run-down house in a poverty stricken part of London, he waited to be thrown into debtor's prison or to die.

On Aug. 22, 1741, through the fog of depression, as if seized by some divine agency, Handel received a libretto based on the life of Jesus as well a synchronous invitation to compose a work for a charity benefit performance. He felt a surge of creative energy. During a 24-day period, he worked non-stop and completed "Messiah," his greatest work. It was his own personal crucifixion and descent into Hades, his residence in melancholia, that produced his greatest and best known work.

This does not mean to me that such depression, despair and melancholy will necessarily make you rich, famous and 'Oprah-worthy' - but that invisible operations are always going on at the soul level during such times. Many, perhaps most people will not see the tangible fruit of their dark descents, but we may be helped to know that it is not just mental illness with no purpose.

So, how is it going? It depends on the day, or night, or moment in question. But I trust that a cosmos which can turn such chaos into order over and over at the physical level, does the same at the psycho-spiritual level.
Posted by Michael (Mike) Bogar at 11:08 PM