The Necessity of Losing Your Head

Have you ever said, "Sorry, I lost my head for a moment?"

I understand the need to apologize since we may have been inconsiderate or unkind to someone, but losing your head is archetypal, a universal experience, a normal and necessary part of growing a human soul. Most of us do not go through life with just one head. 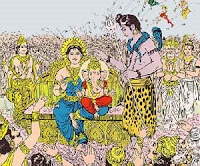 You may remember Ganesh, the Hindu God with a human body and an elephant head. He was the son of Shiva and Parvati. In a fit of anger, Lord Shiva decapitated his son. He immediately replaced the human head with the head of a wise elephant who had large ears and a broken left tusk. This symbolizes the necessity of having one's old head or way of thinking and seeing removed by the gods so that a new, wiser head with larger, listening ears can replace it. The broken left tusk is a symbol of a humbled ego.

Next time you 'lose your head,' pay attention. The head that is being lopped off, most often ma

nifested by a discharge of emotions, is the result of the swift blade of a paternal god. Pay attention to the discharge, the words, the behaviors when you are 'losing it.' Carl Jung said that the 'gods speak to us in our symptoms.' James Hillman says, 'if you want to know your current value system, pay attention to your most explosive emotions.'

John the Baptist was decapitated to symbolize what he predicted before he baptized the Christ, “I must decrease that he may increase.” The first thing a

conquering ruler does is to decapitate the prior ruler, or deface any images of the king or his god, symbolizing a new way of thinking.


A 'science of mind' principle is that the head I have today will not be the head I have next year at this time, the mind or consciousness I am operating through today will either be different, or is in the process of changing. I am always having a head removed and a new head attached. I will cooperate by losing my head with awareness, or I will be resisting through a stubborn ego, often fortified by religious justifications. The most emotional and most difficult heads to lop off are religious heads. Second are political heads. Put the two together, and you have a very hard head to remove.

When we resist decapitation, we ask for a sharper sword and more vicious blow. Sometimes we avoid losing the old head and the arrival of a new head through acts of psycho-spiritual denial; we employ meditation or various therapies. The head doesn't need to be replaced, we reason, just fixed or healed, or prayed for.

Pay attention to words, they are living things. Soul inhabits our idioms and terminology, often giving us more truly therapeutic insight than the various academic manuals of herd psychology or pat religious answers and self help books. So go a-head, move a-head, lose your head. Surrender.

Look to Ganesh. Ask him how it felt to have the old head whacked off, and then ask him if he would take it back after receiving the new head.

Where are you currently 'losing your head?'
Posted by Michael (Mike) Bogar at 11:19 PM