True Understanding Means to Stand Under: The Ego Surrendered 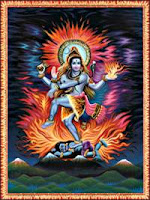 DANCING SHIVA AND THE CRUSHED DWARF

You may have seen the statue or picture of Shiva, the Hindu God dancing in a circle of fire with one foot firmly pinning a tiny dwarflike creature to the ground. This is often interpreted as the struggle between divinity and the heroic ego self, with divinity eventually conquering and burning away the rascal ego.

This same archetypal image is found in the biblical story of a terrified and subdued Jacob wrestling with the Angel of the LORD in the dark of night.

Jacob means deceiver or manipulator in Hebrew. The name was assigned to him at birth as he emerged from his mother’s womb holding onto the heel of his twin brother, Esau. Jacob the ‘tripper’ or manipulator of men and God would spend his life in one scheme after another, conniving through force or kindness to get what he thought would make him happy. For twenty four years Jacob was very successful - amassing wives, concubines, wealth and children. That is what the ego does; it complains like a sinner or compliments like a Pharisee to get what it wants.

Jacob is an archetype of the inflated heroic ego which runs on self will. This is not the evil ego of so many Christian and New Age harangues, but the normal and necessary ego of human soul-making. Carl Jung said, “We spend thirty five years acquiring an ego and thirty five more getting rid of it.” We are each born with our inner Jacob and a certain amount of conniving and manipulation. No human is exempt, though those who fancy themselves 'nice people' often have a difficult time seeing their subtle forms of manipulation. These folks are frequently in emotional pain, but unaware that they are causing it through self centered 'love and kindness'.

THE TWO COMMAND CENTERS IN THE PSYCHE

The LORD said to Rebekah, "Two nations are in your womb, and two peoples from within you will be separated; one people will be stronger than the other, and the older will serve the younger." Genesis 25:23

In addition to the ego-self, there is a second Self or center in us. Some call it conscience, some call it the social gene and others call it the God gene. Whatever it is, it whispers or shouts through our increasing discontent that something is missing.

Our self obsessive anxious thoughts, fearful life problems and manipulative behaviors come into conflict with that other internal Higher Self - the dancing Shiva or Angel of the LORD which calls for our surrender. This is not some God ‘out there’ who wants to obliterate our existence and rule over us with religious laws or self help formulas, but rather a second command center found in every normal human psyche. That is what Jung meant when he said we must experience ego inflation before we can experience ego deflation. Just as the garden seed must swell and crack apart beneath the dark soil, so the swollen ego must eventually crack apart and bring enough pain into an individual’s life so he/she can evolve spiritually.

Eckhart Tolle writes, “Suffering has a noble purpose: the evolution of consciousness and the burning up of ego.” [Without suffering we would] “not evolve as human beings and would remain shallow, identified with the external form of things. Suffering drives you deeper. The paradox is that suffering is caused by identification with form and erodes identification with form. A lot of it is caused by the ego, although eventually suffering destroys the ego – but not until you suffer consciously.” A New Earth by Eckhart Tolle, pp. 101-102

THE NECESSITY OF WOUNDS 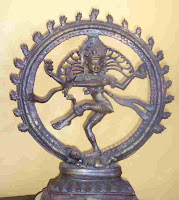 t Shiva dancing on the ego-dwarf which is being burned away, and you will have a visual of what Tolle is talking about. This is a painful process.

Jacob falls to his knees after his hip is wounded. He is then able to ask for and receive the blessing of peace of mind. A new creation came into existence. His name was changed from Jacob (ego manipulator) to Israel (overcomer of ego). The story says he ‘wrestled with God and man and overcame.’ In other words, the lifelong struggle between the two centers of self, ego-self and Divine Self, has been resolved in that moment. Those who understand this image find the process ongoing throughout life. A few rare souls, like the Buddah, seem to fully 'bud' with their ego-self continually under the Higher-Self.

UNDERSTANDING IS STANDING UNDER

True understanding is the experience of ‘standing under’. The dwarfed ego ‘stands under’ the alm 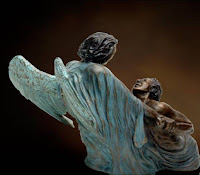 ighty Shiva. The manipulating Jacob with the displaced hip ‘stands under’ the God-Self. When we have genuinely understood or stood under the Higher Self, we existentially know peace and joy in the midst of any situation, especially anxious and fearful situations. This is infinitely more than intellectually 'understanding' the spiritual concept of surrender; this is gnosis. The will of my little dwarf self stands under the Wisdom and Will of the Higher Self. Freedom from fear, resentment and anxiety result, always.
Posted by Michael (Mike) Bogar at 10:19 PM