Talking to My Selves in Dreams

WE ALL HAVE MULTIPLE PERSONALITIES

Thesis: Dreams are the voices of our multiple personalities.

Rita Carter’s book, Multiplicity, The New Science of Personality, Identity and Self, presents evidence that we all have multiple personalities, or more than one self or identity. We

are actually many selves, each slightly or radically different. Her work provides an excellent balance to Eckhart Tolle's popular book, The New Earth, which speaks about *'the' ego. I appreciateTolle's valuable observations, however, am troubled by the mono-psychological cul de sac he leaves us in when he implies we have only a single self.

Carter says that most of us have a Major or central personality that we display publicly, and 1-20 Minor personalities who emerge in various situations and with different people. The advent of the Internet age - with email, instant messaging, dating services, role playing games, and camera phones has allowed people to experiment more with their various minor personalities. Carter also suggests that we may have one or several **Micro personalities – a self or selves which hang in our consciousness by a thread and barely exist, yet have the potential of becoming a thriving Minor personality, or less likely, a reigning Major personality. She says that some people have no Major, but rather several Minor personalities which they switch between all day long. We usually call such people ‘moody’ or unpredictable.

The dissociative disorder called MPD (Multiple Personality Disorder) is neither minimized nor dismissed by recognizing that we all have multiples. Multiples are considered a ‘disorder’ when they don’t communicate with each other and cause harm to the life of the inflicted p

erson or those around him/her. In other words, the demure third grade school teacher who comes home from class and goes online to become the sensual Madame QueenDom does not suffer from MPD as long as she switches back to the elementary teacher when the phone rings and it is the parent of one of her students. So called normal people’s various selves know each other to at least some extent, and have some control over when and where they emerge, and do little long term damage. They may feel guilty, confused and hypocritical, but such emotions may be the result of the assumption of our mono-obsessed culture which views a single consistent 'self' as the goal of all healthy psyches.

NOT A NEW THEORY

Multiple selves is not a new theory. It has been around for ages. The ***Jesus of the ancient Gospel of Thomas suggested this in saying #84, "When you see your likeness (self), you are happy. But when you see your images (selves) that came into being before you and that neither die nor become visible, how much you will have to bear!"

Goethe, the German philosopher and poet said, “Two souls, alas! reside within my breast, and each withdraws from and repels its brother.” Saint Paul confessed that he had one self which wanted to love God and mankind, and another personality that sought to satisfy only selfish desires (Romans 7:15-20). Carl Jung spoke of discovering two selves early in life; he refer 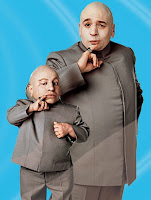 red to them as Number One and Number Two. Later Jung would speak of the many ‘little people’ inside each of us. Mike Meyers addressed this humorously in Austin Powers: The Spy Who Shagged Me, through the character of Mini-Me. Robert Louis Stevenson’s book, Dr Jekyll and Mr. Hyde, comes to mind as well, and Walt Whitman who wrote, "Do I contradict myself? Very well then, I contradict myself. I am complex. I contain multitudes."
FROM THE MEDIEVAL RACK TO MEDICAL PROZAC

Our monotheistic, monogamous, monopolistic, mono-psychological West does not typically like the heresy of anything poly (many). We will not tolerate polytheism, polygamy or polyamory. We focus on integration and wholeness. We emphasize law, order, consistency and integrity. We want complete equality between races, genders and religions. Even our professed love of multi-culturalism would have us believe that all humans are basically the same. Unity, united, union and unification are the aims of this culture. Abraham Lincoln sacrificed the lives of over half a million men to keep these states united. G.W. Bush Jr. fancies himself a sort of modern Lincoln, using force to unite the world under American democracy. Being number one is admired in sports and business, all the rest are losers. Any hint of dysfunction or fragmentation is immediately a disorder. We consider insanity (not being whole) the worst fate to befall a human being. Anything bi-, poly-, schizoid or multiple is the scientific equivalent of medieval heresy. We don't put our fragmented heretics on the rack to bring them around to religious unity, we put them on Prozac to make them socially and statistically 'normal'. Medical and Medieval are perilously closely related etymologicaly and ideologically. Both are 'medi' words - the middle, transitioning from darkness and fragmentation to healing and wholeness. These are noble aspirations, but only part of the human condition.

Carter’s theory suggests that our obsession with The One may be out of step with the facts about the human Psyche. The recent rise in interest toward mythologies, via people like Joseph Campbell and George Lucas, portends a new awareness of our multiple selves. Most ancient cultures were polytheistic because the Psyche ex-presses what it is, multiple. This modern rediscovery of myth is not about religion per se, but about our frantic human Psyche trying to recover our many hidden and neglected selves! There are many ramifications to this theory, and I would like to touch on one: the role of dreams as they relate to our several selves.

DREAMS AND OUR MANY SELVES

It seems to me that this idea of having multiple selves may explain the primary purpose of dreams. Perhaps dreams provide voices for the various personalities. James Hillman, writes:

“Dreams tell the soul’s tales in persons… psyche is using a particular metaphorical language system which is very detailed and concrete and seems to accomplish a specific end….” Re-Visioning Psychology, pp. 82-83

If you substitute the word personalities for ‘persons’, then dreams become a means for our various selves to communicate while they have our focused attention during sleep, and upon waking. We ought to pay special attention to those dreams which cause us to awaken with deep emotions. Hillman says that certain dreams cause us to be “afflicted [and] haunted through the day, psychologically on edge. The pathologized images have moved the soul in several ways.” This is reminiscent of Jesus saying, “But when you see your images (selves)… you will have much to bear!" Gospel of Thomas, saying 84 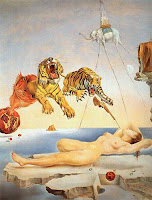 cturnal consulting couch. Each person is me. Even the animals and geography are metaphors for my various selves. We most often identify the observing character in our dreams as The self, as me. Perhaps that observing person is just the Major personality, while the other persons and places are the Minor or Micro selves trying to get some attention. They have some important information disguised in bizarre behaviors and symbols to really elicit attention.


We need to pay special notice to those recurring dreams or themes, especially those evoking strong emotions. Hillman suggests that we rightly understand the guilt and shame which are inevitably induced by certain dreams, “We can let go of this style of guilt, seeing through it as a defensive business that prevents archetypal fantasies (images) from coming through. For from the archetypal point of view, the matter is less that one feels guilty than to whom: to which person (personality) of the psyche and within which myth does my affliction belong, and does it bespeak an obligation? Which figures (personalities) in which complexes are now laying claim? From this perspective the guilt brought by pathologizing (emotional suffering) takes on radical importance. It leads out of the ego and into recognition that through a pathologized experience I am bound to archetypal persons (personalities) who want something from me and to whom I owe remembrance.”

It is interesting to me that I may have a very weird dream and feel fine until I wake up, and the Major ego personality hijacks the dream. The Minor or Micro is shamed and silenced. Instead of listening, I try to get beyond my pathology and heal the aberrant images. I think this is partially what Hillman is suggesting – that we move past the guilt heaped upon us by the Major personality (Freud’s Super Ego), and ask the question, “Who are you and what do you want?”

I recently had a dream where an attractive young married woman was in love with me, and then suddenly changed her mind. She, husband by her side, nonchalantly told me that she was going back to her husband and had no feelings for me whatsoever. I awoke devastated. My Major personality told me I was a covert adulterer and a loser to boot. Then I applied Hillman’s advice and asked, “Who are you? Which neglected self is emerging? What do you want me to know or remember? What do I owe you?” Immediately, my perception shifted. It was not a dream about me, it was an aspect of me. I was not having a dream, the dream was having me. I saw that one of my feminine minor selves is an aloof lover who runs roughshod over the feelings of those close to me, rejecting them when they get too close. It was a sobering revelation. In the dream she was asking, "How do 'you' like that? That is how others feel when 'you' do that."
If you find this idea interesting, read Carter’s book, Multiplicity, The New Science of Personality, Identity and Self.


*Tolkien's book, The Hobbit, takes a poke at our western propensity of mono-ism when he puts the definite article before The Hill and The River where Bilbo lived, thinking there was only one location on Middle Earth. By the end of the story, with Gandalf's help, he discovered many places, and many other selves which he didn't even know he contained- a thief, a warrior, coward, etc.

**This paradigm helps to explain the phenomenon of 'conversion' or radical psyhic shifts which some people experience. A Minor or Micro personality suddenly acquires 'the straw that broke the camel's back' and like a techtonic continental shift, replaces the old Major personality. This gives hope to those of us who would like to experience such a shift, though it is most likely to take place gradually through re-education and psycho-spiritual practices. (cf William James and Big Book of AA)

***One Bible translator suggested that the metaphorical meaning of Jesus’ saying in John’s Gospel, “In my Father’s house are many mansions…” may refer to more than one reality or self. The word mansion is used in other ancient sources to refer to a teacher’s classroom; perhaps Jesus was suggesting that this life contained a number of classrooms or selves, each bringing a different lesson to the growing soul. Keep in mind that those who took Jesus literally in John’s Gospel were considered spiritually ignorant (John 3, et al).