ADDICTION, ASTRONOMY AND SOUL-MAKING: The Mysterious Role of Dark Matter

Astronomy Professor Dr. Mark Whittle of the U. of Virginia, in a lecture from the Teaching Company titled “Cosmic Acceleration—Falling Outward,” says: “Most importantly, you should understand why dark matter makes the Universe fall outward and accelerate…An important part of this account is still missing! When a sphere of vacuum expands, we’ve made more vacuum, which has mass-energy. Where does that energy come from? The gravitational energy liberated by falling outward creates this new vacuum—it creates the very space into which the Universe is falling! This is a truly remarkable mechanism. The same mechanism is also thought to drive the inflationary launch of our Universe: A very dense vacuum rapidly ‘fell outward,’ making more and more of itself, and this ultimately made our Universe.”

In other words, Dark Energy counteracts gravity. Rather than gravity pushing all of the billions of galaxies together into one unified clump, Dark Energy seems to be pushing them apart while at the same time creating new space and propelling them outward.

In 1917 Einstein introduced the “cosmological constant" which posited a long-range repulsive force that balanced matter’s attractive force” (Cosmology: The History and Nature of the Universe, Professor Mark Whittle)

At the bare minimum, biologically, that means that each of us is living in a harmonic balance between “falling outward” (dark energy) and being pushed downward (gravity)—a mysterious attraction and repulsion occurring simultaneously in order to create new space and orderly worlds! This is the image in Genesis 1 as the Spirit hovers over (presses downward) the expanding oceanic chaos, and other push-pull cosmic egg stories (see Humpty Dumpty). 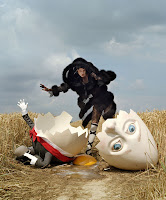 If we can apply this to consciousness or psycho-spiritual development, then each personality, family unit, and national collective experiences a kind of necessary and normal “psychological or social constant” that simultaneously puts us together and pulls us apart. I have yet to meet a human or study a culture that does not know this experience, although I have met many who do not see it as necessary, normal and inevitable. We live in a time that is deliciously and maliciously obsessed with peace, equality, security, certainty and utopian ideals for all. Perhaps that is the goal on this earth--but I seriously doubt it. The cosmic/psychic design seems to require the isometrics of opposites (the tree of good and evil) and a "fall" outward from the center (symbolized in Eden and Pandora's Box).

Perhaps “addictions” are the psychological correspondent to cosmic “dark matter/energy”. Perhaps my alcoholism, and every other pathology and "disorder" is a dark/unconscious psychic energy that forces us outward into periods of disintegration in order to create new psychic space for the making of more consciousness or soul--the generation of countless new character traits in a lifetime. Perhaps when Genesis says, "In the beginning...God spoke...and there was........" is the first act of ad-diction--a "speaking toward". And from that primordial beginning, existence has been one addiction after the other, pushing us outward into new psychic space via disassembling and reassembling--dark energy and gravity.

The word addiction itself is fun to play with: Ad = toward; diction = to speak. Addiction is "speaking toward," implying that a dynamic word or idea is living and speaking in and through the addictive substance/person/situation. The word or voice of a god/dess is in the addictive process, just as the paradoxical healing was in the brass serpent in Numbers 21--the very snakes that were toxic contain the healing solution (salvation). Jesus (John's Gospel) used this very image of the serpent being raised up to portray his own "healing" crucifixion (John 3:14-15).  Eternal Life, aka God Life, is to be found in the poisonous venom, the horrific slaughter, the toxic disintegration on the cross--what Paul calls the "foolishness of the cross". That our healing is in the pathologized experience is still mocked by the "wise" pharmaceutical and political philosophers of this world (I Cor. 1:18-31). Perhaps our government needs a Dept. of Pathologizing. Then when idiotic and deadly choices are made by high ranking officials (invasion of Iran, Benghazi neglect and cover up), there is a place to deal with and learn from them.

A universe without the necessary phenomenon of "falling outward" connected to dark (unconscious) energy would result in a compressed little speck of unformed and undivided (non individuated) matter. The same is true of the human soul. Our individuation is the direct result of falling apart and being put back together again and again.
Every time my addiction appears, it is “speaking toward” my individual expansion--edging the nascent self/Self toward completion. Every time I ignore the symbolic voice (diction) and submit to the literal substitute (alcohol) in order to experience some surrogate expansion, I simply postpone the inevitable trajectory of my own soul-making course. The unveiling of the new self is located in the object of our addiction. My current state/State of consciousness (individually or collectively) will fixate on either external States (including Statist philosophies in general), or internal states.

As mentioned earlier, the “foolishness of the cross” Paul speaks about seems to point to this idea: that it is in and through our suffering that God (new consciousness or new birth) arrives. Many have understood this to mean that it is meritorious simply to suffer! No! I think Paul means that our suffering (including our addictions) contains merit because each moment of discomfort and pain is the ovum of our evolving personality. Just as Jesus' suffering preceded the resurrection to new life, so do our own times of suffering (addiction) precede a new chapter in life. Each addiction is the potential struggling sperm cell seeking to locate and unite with the egg of our personal calling and next stage of destiny. When the addictive fall outward of the anguished soul and the gravitational force of Holy spirit are working together, something new emerges.

This may help us to understand the idea of Christ's shed “blood” which is so emphasized by the Bible and Christian theology. One can either dismiss this image of shed blood, or try to understand why it has been so powerful for countless millions throughout history. "Shed" or spilled blood is a metaphor for  the “falling outward” of life--the end of a life which contains the seeds (DNA) of a new life. The Islamic Koran says, "In the name of your Lord and Cherisher, who created--created man, out of a mere clot of congealed blood..." (Sura 96:1-2). The Hebrew Bible says, "The life is in the blood," and the sacrifice of blood is the means for atonement and a new beginning. Nearly every ancient and many modern religions shed blood in some life giving and life making ritual, literally or symbolically. Some see the modern phenomena of piercings and tattoos as a new form of blood sacrifice to the gods of Beauty as a means to a new self image: "Modern Day Blood Sacrifice" by Drew Lawrence. Clearly a piercing or tattoo symbolizes a new phase or experience in one's life. Bloody tattoos and piercings typically come with the arrival of a new stage in life, or because of some life changing event. The new "life is in the blood." The shedding of blood corresponds psychologically with the "falling outward" of the dark energy of cosmological physics. Dark Matter's strange fall outward corresponds with death and disintegration prior to new life and reintegration. Christ's "shed blood" captures this idea, and for many affects the psyche in a an experience of disintegrating the old life in order to, in Paul's words, "put on the new self" (Eph. 4:24; Col. 3:10).